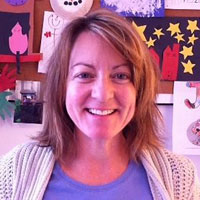 Originally from Australia, Julie has worked with children as an occupational therapist for over 20 years in several countries, and now calls Canada home. Along the way, she has had formal training in Neurodevelopmental Therapy (NDT) and Sensory Integration (SI). She enjoys the privilege of working with children with all types of physical, sensory and learning challenges. In addition to working at Skylark for the past 2 years, Julie also works as a school district OT part-time.

“Julie has been working with my son Joseph for approximately three years, shortly after he was diagnosed with autism. At the outset he was extremely shy and had debilitating anxiety that really hindered his progress in school and his whole enjoyment of life. Before working with Julie Joseph had never enjoyed a sport or gym activity, had never explored playground equipment, was unable to tolerate the noise in the public pool, was unable to even catch a ball, tie a shoe lace or use a knife and fork. Julie quickly identified the reasons for his difficulties and helped me and school staff understand how we should best support him.

Read more
Initially I was worried that Joseph would be too shy to participate in sessions with Julie, or too anxious to work on his difficulties. But Julie was able to read him perfectly and Joseph considers her a very good, trusted friend. She somehow managed to build his skills without him even realizing he was working so hard. She was able to come up with creative and fun ideas and be
flexible, depending on his stress levels.

Joseph made huge progress with his motor skills, organization and emotional control. She introduced concepts that have since become second nature for him when tackling new tasks. Joseph is now a different child, so much more confident. His anxiety has reduced so he now has much better attendance in school and as a result he is doing well academically. I was amazed this year when Joseph was able to perform a talk during assembly because even a year ago this would have been unthinkable for him. Socially he is doing better too with his improved self esteem. Recently, Julie suggested Joseph take up kayaking and I couldn’t be happier for him. Joseph finally has a hobby he enjoys and that he is proud of. His progress really is beyond anything I could have ever expected.

Joseph has been very lucky to have benefited from Julie. I am extremely grateful for Julie’s input, persistence, and solid support of the whole family. Thank you!”