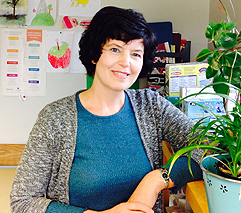 General Info:
I have been working as a senior speech-language pathologist at Skylark for the past 14 years. SLP has been my passion since I graduated from university. All my experiences with children have been integral to my practice because they have all shaped my therapeutic approach. I believe in a strong therapeutic relationship; there is a critical link between social-emotional functioning and success in therapy. Creating a personalized plan for each client which considers the unique aspects of individuals helps clients succeed and reach their full potential. I emphasize a team approach, which considers the needs of all parties involved in a child’s life. Furthermore, the importance of continuity across environments cannot be stressed enough; when goals are reinforced in multiple environments, a child can flourish and reach their full potential. I believe in creating a balance between supporting students and at the same time allowing them to become intrinsically-motivated individuals by highlighting their strengths and successes. I help children foster a growth mindset throughout therapy, which highlights the importance of learning experiences throughout life resulting in personal and academic growth. Speech and Language Pathology has been such an enriching experience for me, and I have been lucky enough to have helped so many children progress in their learning journey.

Biography:
I am a senior speech-language pathologist registered through the College of Speech and Hearing Health Professionals of BC. My SLP journey began in Europe where I was an assistant professor in the speech pathology department at the University of Sofia. Upon graduating with a master’s degree in speech pathology and working as an assistant professor for several years, I came to Canada 19 years ago and continued my practice as a speech and language professional. I became a registered speech pathologist in Canada in 2003 through BCASLPA and started working as an SLP for the Surrey School District. I began working at Skylark 14 years ago. I had the option to continue working with the school district but chose to remain at Skylark as I could provide more intensive and in-depth therapy to my clients. Currently, my caseload primarily includes school-aged children with developmental delays. I am particularly interested in working with children on the Autism Spectrum, as this is a very diverse group of individuals. My primary focus is improving individuals’ receptive, expressive and social language skills. I have published multiple papers in specialized journals in France, Greece and Bulgaria, and I am currently pursuing a PhD. In my spare time, I enjoy family outings with my two wonderful children. I also enjoy being out in nature and exploring new environments through travel.

“Speech Language Pathologist Mimi Ilarionova has worked with our son Mark (who has autism) since the age of 7. When Mark started with Mimi, his language skills were very limited. He had great difficulty getting his message across when speaking and decoding messages when listening. This low level of communication abilities made school very frustrating and upsetting for our son. Mark’s confidence was low, meltdowns were frequent, and he was unable to negotiate learning effectively on his own. It was quite obvious to outsiders that our son was “different”. My wife and I didn’t know if our son would ever be able to hold a job, drive a car, or live on his own.

Read more
Mimi worked with our son using all sorts of different techniques (she is always attending workshops and learning new strategies). My first clue that Mimi was effective came when I no longer had to sit in the same room during the therapy sessions, as my son had “connected” with Mimi and was able to sit through sessions on his own without having a meltdown.

After every session, Mimi would debrief with Mark and me and discuss what they worked on, what was successful, and what could be improved on. My son never got bored with any of the sessions, as she continuously introduced new learning strategies. Mimi was always gently stretching Mark’s abilities to lift his language abilities to a higher and higher level.

Mimi would also give my son and me “homework” to do during the week. When he was young, she might send some picture cards home with us. When he got older, she might suggest a video. Once his language abilities were good enough, she would assign him language worksheets to learn word definitions, idioms (“it’s raining cats and dogs”), and other word facts. As my son became a teenager, she would give him reading assignments to improve his comprehension and teach him how to succeed in English class in Middle and Secondary School.

Mark’s time with Mimi will soon be ending. He is now a 17 year-old grade 12 student who does homework on his own (and brought home his first “straight–A” report card last semester). He has had a part-time job at a major supermarket for well over a year (which he got on his own). He also had a Learners Driver’s Licence for 11 months now and will test for his “N” in a month’s time. Unless you know him very well, you wouldn’t know he has autism or had language difficulties.

Every child is different, but every child has great potential. I have no doubt that Mimi Ilarionova can play a very large role in helping a child reach their full potential. I’ve seen it with my own eyes."

"Mimi has been seeing our two sons Aiden and Galen (Both autistic) for seven years and what a wonder she is! She is a very kind, thoughtful, diligent and intelligent person and has become a friend to our whole family. Great communication with parents and every visit was a pleasant experience! She always arranged interesting activities appropriate for each kid’s age and development levels (our two kids are very different). She encouraged them to express their emotions, thoughts and opinions, practice conversation skills and social skills. She also helped them with other issues in life and communicated with teachers in their schools.
Read more

She helped our first son to get his first job this past summer. With her help our kids have progressed a lot over the years in their language skills and social abilities. Our first son is developing into a confident and articulate young man; and our second son is also able to express himself better. Mimi is the best SLP one can hope for and we are very grateful to have her in our lives."